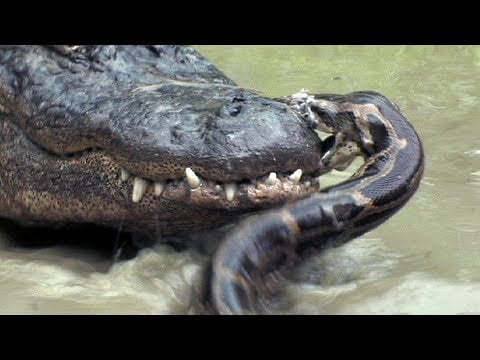 Watch this amazing fight between the Alligator and the Burmese Python in real-live video here! https://www.youtube.com/watch?v=xfYAj1k9uZM

Once upon a time, there was this Python living near the everglades of Florida. He was one of the only Pythons that could be found. This was before the python missile crisis, before the pythons began to come over and take over the area. Before the Python Challenge hunts. It was just him, and he liked it like that.

One day, while he was hanging on a hammock getting some good ole Florida sunshine and looking over reports on VPS hosting services, he caught a glimpse of something moving in the waters. It was… an alligator. Can you believe it? A Gator was violating his territory! Now the Python, having the ego he had, considered himself a top predator in the area, and thought to himself, ‘I can take this gator down’. So he began to swim towards it….

The gator, while swimming around looking for something to eat, stopped in his tracks. But the Python, he kept on moving towards it. How dare this gator come into his territory like this. He came, and ATTACKED! The gator was helpless. After a very hard fight, the Python decided to let the Gator live. He sized the Gator down, and immediately, the gator new what time it was. It was time… to go. While the Python was staring at the Gator, the Gator in disbelief over being given a chance to leave, turned around intimidated, and left.

For the first time in history, the Burmese Pythons and the Gators were fighting for the same resources, and the same territory. Watch this amazing fight between the Alligator and the Burmese Python in real-live video here! https://www.youtube.com/watch?v=xfYAj1k9uZM

What is the difference between different web hosting plans (shared, reseller, vps, etc)

Bringing in new servers and removing the old

Miami Heat and the NBA season is here!

Bringing in new servers and removing the old